Yikes, I've been away far too long - sorry!
Somewhere in between, I was in Qatar on a work trip - had a morning to myself and so I visited the Museum of Islamic Art in Doha. Here it is - isn't it spectacular? 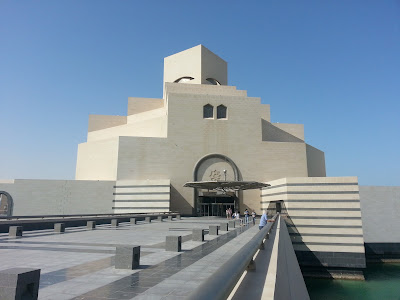 I also brought home a box of dried, sweet dates and made sticky date pudding with caramel sauce (but reduce the sugar sliiiightly) - that was my Saturday morning. 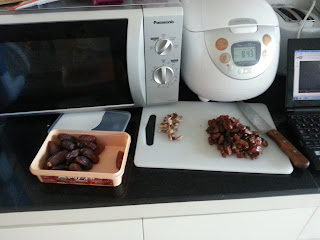 I also brought home a cold. !@&)(*!$ I felt just fine when I got back and even went to training on Thursday night. But on Friday morning I woke up with a sore throat and a sniffle. Friday and Saturday involved a tug of war with my stubborn cold, lots of fluids, and rest.

Today I woke up feeling just fine and ran (not raced) the Venus Run, a 5km road race put on by the Singapore Athletic Association. Because I was just getting over the cold I was very cautious and fighting my competitive catch-up-and-pass-the-person-in-front-of-me instincts the whole way.

Aside from all the sparkly pink*, it was actually very well-organised.
(*It's just a colour. Why do colours have to be gendered? They don't, actually. Slate tells it like it is.)

Funny aside: I sold my cerise Venus Run shirt to a coworker, who asked, aren't you going to wear it on race day?
I never wear (eat/ drink/ you name it) anything new on race day, I told her. What if something I haven't tried before itches? Or is uncomfortable? I'd have a pretty miserable race day. I don't know why most runners here don't realise that.
I think they assume you have to wear it, she said.


"On race day the streets of Singapore looked like the Dean Dome during a UNC-Duke game, with nearly everyone wearing a brand new sky blue singlet. When I expressed surprise about this to an expat friend she told me that Singaporeans are accustomed to wearing uniforms. If you give them a shirt, they think they are supposed to wear it. Singaporeans try to do what they think is expected."

The race started and ended at Marina Barrage. Yep, on the vast green roof, which people normally use for picnics and kite-flying. Meaning: you had to run down the slope at the start, and then UP THE SAME EVIL SLOPE on the other side at the end. When I got to the upslope I started laughing: on Thursday my coach Trudy had us do high-speed zigzags up the grassy slope at the Botanic Gardens. Eight times. I was not expecting to have trained for PRECISELY THIS SITUATION...!!!

The route was a pretty straightforward out-and-back, across the dam, through Marina Bay East, a lollipop u-turn and back again. According to Holly it was at least 0.2 miles/ 321.9m too long, tacking on a good minute and a half for me, and I finished in 29:21.

At my weird in-between pace I often find myself running alone, which usually means more space for me...until there isn't. On the way back, the mid-pack came thundering along towards me in the opposite direction and spilled over wayyyy across the invisible centre line. I'll just squidge over to the left now...

Late in the game I did a flying split in front of a race photographer, and he cracked up.

Because of my cold I didn't get a chance to push myself till I (almost) blow up, till it really hurts. As Amby Burfoot writes about marathoning, "I don’t hit the Wall, because I don’t tempt it. I’m the Cowardly Lion of marathoners, and that’s okay with me." I am also completely chicken. No offense to chickens.

Right at the end I spotted Holly cheering everyone on, all by her lonesome, with a steady stream of 'You can do it little steps little steps you're right around the corner you can't see it but I can just one more minute you can do anything for one minute'. So I joined her. A little while later she was ambushed by a fellow American tracking down a familiar accent!

This afternoon I had some very good coffee with friends, ate too much, and ate too much again. In all, pretty good for a lazy Sunday... and how was your weekend?
Posted by Grace at 10:39 PM

There's more stuff to read by people who write better